Welcome to the Not Found On.

Not Found On is a co-written feminist queer knowledge project.

This space is currently being created with, by and for queer feminist bodies.

This ongoing project has two aims: to provide a space run by feminist queer bodies to share, record and connect art and social projects and to question the platforms we participate in online the culture and politics of commercial & non commercial space. We are hoping to grow with you, as more in included in this space.

For the project background

The is project ongoing has two aims:

We are hoping to grow with you, as more in included in this space.

NFO's aim is to be a co-written and incomplete non-stanardised language collective knowledge network and online space for feminist, queer and intersectionally focused artistic and social projects plus the spaces that support them. With a specific focus on strategies of expression, self organisation and radical self care.

This a peer sharing resource is being created using open source tools, and designed and written with, for and by queer feminist bodies. Putting the subjective experience of the body at the centre of knowledge creation. Working with text, images, audio and video as valid knowledge entries. Embracing that knowledge is not neutral .

What is Not Found On?

Not Found On is a co-written feminist queer knowledge project; a space that is being created with, by and for feminist queer bodies. The aim of Not Found On is to develop a long-lasting, collaborative, non-universalising, caring, consensual, expanding without growth, non-commercial, author-led space.

How and where do we gather our knowledge? Who gets to create ‘facts’?

Not Found On is the desire to co-create a ‘space’ to value and share queer arts and social knowlege.

Recognising that lgbtqia+ ‘spaces’ are often far more than just bars, just bookclubs, just dances, just sports teams, just a magazine or just performances.They have also been sites of community building, sites of resistance, sites of political organisation, sites of transformation, sites of healthcare, sites of survival and sites of knowledge creation. This 'space' is to celebrate knowledge created through subjective lived experience of (some) queer bodies. Asking how can we record and share these in a meaningful way for our communities? What can we learn from each other? 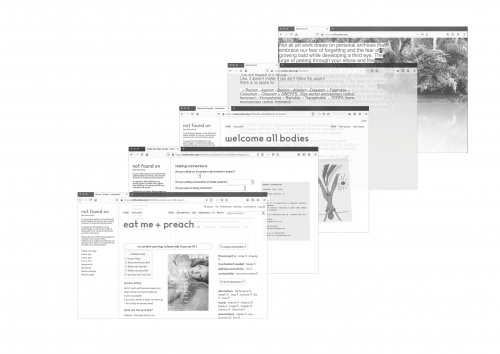 We already do! But generally in spaces that are commercially focused and that regulate our nipples or academic sites that have price barriers for our niche publications, or we are faced with the barriers to inclusion in mainstream knowledge space such a as wikipedia. Wikipedia offers the illusion of inclusion, whilst maintaining normative patriarchal concepts of knowledge creation (via referencing structures) and system biases (predominantly male contributors).

81 percent of LGBT youth have searched for health information online, as compared to just 46 percent of non-LGBT youth

80 percent of LGBT respondents participate in a social networking site, such as Facebook or Twitter, compared to just 58 percent of the general public. [1]

This need to create counterpublics by minority identities is being capitalised on by commercial social media platforms. As ‘Corporations seeking to commodify user information have enclosed the so-called ‘internet commons’ by offering a devils bargain trading access to global networks for individual privacy’ The need to make connection can often exceeds the time or energy required to question these platforms.

Not Found On aims to offer an alternative run and created by queer feminist bodies to address specific community needs such as the need to connect to 'people like us' both online and in real life, to share resources, to record our own histories and a space to be critical of the social media channels on which we rely but also the structure of the internet in which we participate.

The title Not Found On has two meanings firstly it points to all that is not adequately recorded, nor respected in mainstream knowledge canons. These are the narratives we never given to read in schools, the artists, the thinkers, the achievements which were and are left out, on the basis of class, race, religion, gender and sexuality.

Secondly it reflects the attempt of this space specifically to house and connect diverse queer experiences, whilst ultimately knowing that it can never and should not try represent all.

Not Found On is indebted to generations that paved the way before us, to cultures that celebrated greater gender and sexual diversity, that were violent suppressed and marginalised by colonial rule. Where the legacy of laws are still being violently enforced today.

The growing acceptance of lgbtqi+ people in western Europe (where this project is initiated) is a product of liberal democracy created from the profits of the exploitation of people, culture and land through violent processes of colonisation of people of colour. Promoting ideologies of dominance and racial superiority that still resonate today.

Profit of colonialism saw the rise of institutions and funds for education, arts which in turn created Womens studies and Queer Theory as formalised field should not be confused as a birthing of the conception of'Queerness'.

There is a need to resist being represented by a singular notion of 'Queerness' as much as there is an acceptable media presentable 'LGBTQIA+ community' either nationally or globally. There is no universal experience but a multiplicity of experiences. That are all too often are white cis gay male middle class focused.

The space is defined as feminist queer and intersectional as an ideological stance active from its inception is committed to integrating what these words means as a continual process.

What Structure Do We Use?

With the resources of time, skills and money available to us, in addition to an approximate number of future contributors, we decided to use a wiki structure for Not Found On. While the most commonly known use of wiki software is Wikipedia, it is also often used by companies, schools and academics to organise and share research. Wikis are not particularly sexy. They are clunky, can be labour- intensive and totally have their limitations. Still, they are a free and open-source tool that enables co-writing among large numbers of people and can host multiple media formats such as text, audio and video. It is stable and relatively easy to install and manage your own version. And, crucially, there is a large community sustaining the technology, which is necessary for the longevity of the project.

How Do We Record Our Communities?

When faced with a blank text box during our first editing session on the platform, the task became daunting.Where to start? What was it that we wanted to be able to share?We thought back to the desires discussed in earlier workshops and came up with a series of questions. They became the basis for creating a new entry on the Not Found On wiki, which guides you through a series of questions about your content. The current form is a first iteration and will grow through future workshops.

Some of these limitation can be overcome as the project progresses and engages with an active community.

On the most general level, we suggest that caring be viewed as a species activity that includes everything that we do to maintain, continue, and repair our “world” so that we can live in it as well as possible. That world includes our bodies, our selves and our environment, all of which we seek to interweave in a complex, life-sustaining web.’